Year and year out the Brown Junior Motor continues in the lead unrivalled and unsurpassed. Its performance, construction, and dependability is the ultimate in miniature engines and though many imitate, none can duplicate. The Brown Junior Motor is a product of the Junior Motors Corporation, the most thorough organization of its kind devoted to a sole purpose – that of producing the finest miniature gasoline engine in the World.

A FEW WORDS OF CAUTION

The Brown Junior Motor is an internal combustion engine. Gasoline is used for fuel. Gasoline fumes, when mixed with the proper amount of air, make a high explosive. Never use the motor in the proximity of open flame or near inflammable materials. Handle it with care always so that the gas is not spilled on your clothing or floor, or on your plane or boat. Should you happen to spill some, wipe it up before you do anything else. The exhaust from an internal combustion engine contains monoxide gas, a deadly poison when inhaled even in dilute form. Never run your motor indoors unless you provide ample means for carrying off the exhaust fumes. Provide for plenty of fresh air, freely circulated, always. Don’t race your motor when it is new. Run it at moderate speeds until well broken in. Do not use a light body oil for lubrication purposes. We have found SAE 70 oil to be most satisfactory. It should be mixed with the gas in the ratio: 4 parts gas to 1 part oil and kept at that ratio until the motor has been well broken in. Don’t use more than two (2) dry cells for your electric current supply. Your coil is built for 3,5 volts maximum. Do not allow your motor to stand with current on and the points of timer in contact. This forms a closed circuit, which will cause your coil to overheat and the wax to run, and perhaps short circuit the coil even with the current from two flashlight cells. Don’t use a pair of pliers on your spark plug or on any other nut. Use nicely fitting wrenches which may be secured in sets from any hardware or “5 & 10″ store. Do not spread the points of your spark plug. The gap between them should not be greater than .015″ (1/64”), or about the thickness of an ordinary playing card. Never attempt to make adjustments to the timer by bending the breaker spring. Doing so destroys the tension and set of the spring and will surely ruin the timing mechanism. Do not apply heat to the spring. Doing so will take out the temper and injure the spring as much as bending. Don’t use high-test, or so-called anti-knock gasoline. We recommend any well-known low-test gasoline for use in our motors. Don’t hold on to the propellor when starting the motor. Your fingers should be close to the hub of the prop, and the movement of your arm should be in such a manner as to bring your fingers rapidly out of the path of the prop so as not to be struck when the motor fires. 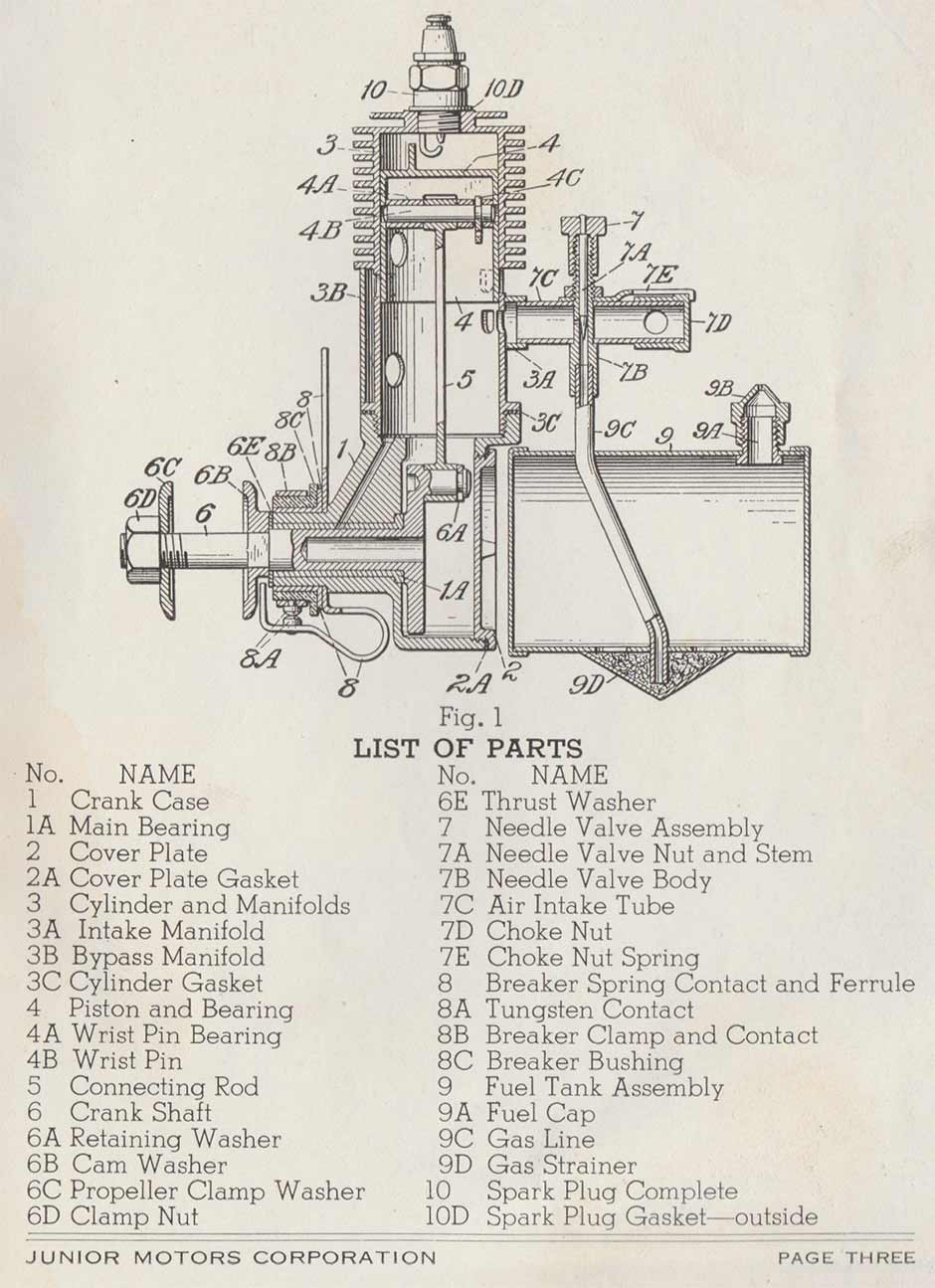 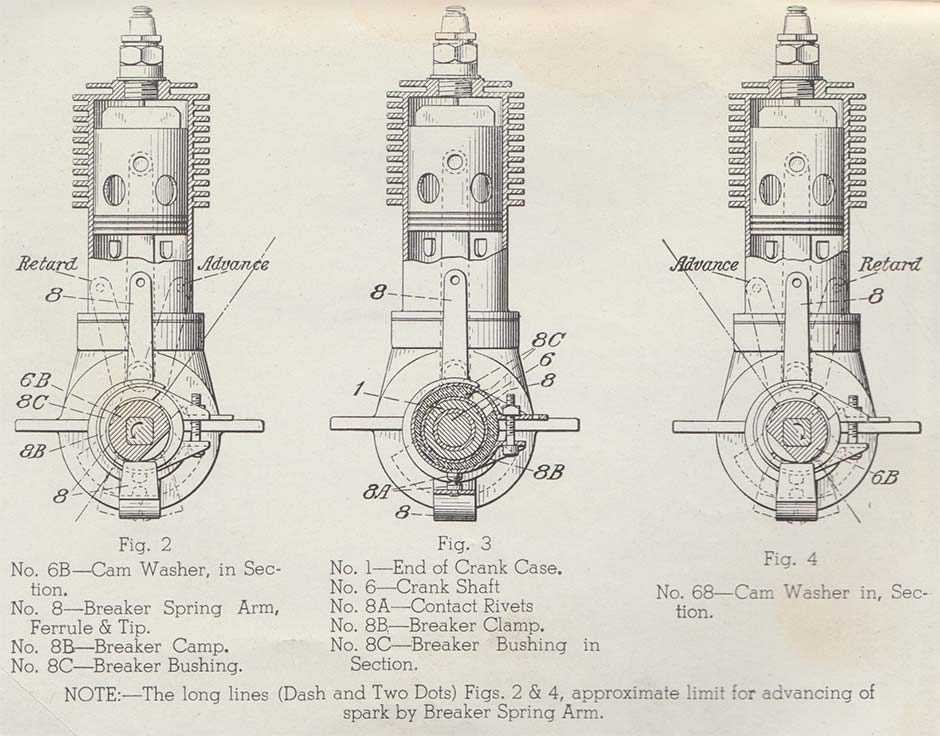 NOTE:—The wiring diagram illustrates the “Hook-up” of Coil, Condenser, Batteries, Etc. This installation should be followed no matter where you place your Coil, Condenser and Batteries in your plane or boat.

It is advisable to use a knife switch or its like for cutting off the current when the motor is not in operation.

If you have to use booster batteries purchase Jack Plugs so you will get good connections.

All Connections should be Neatly and Carefully made and Soldered. 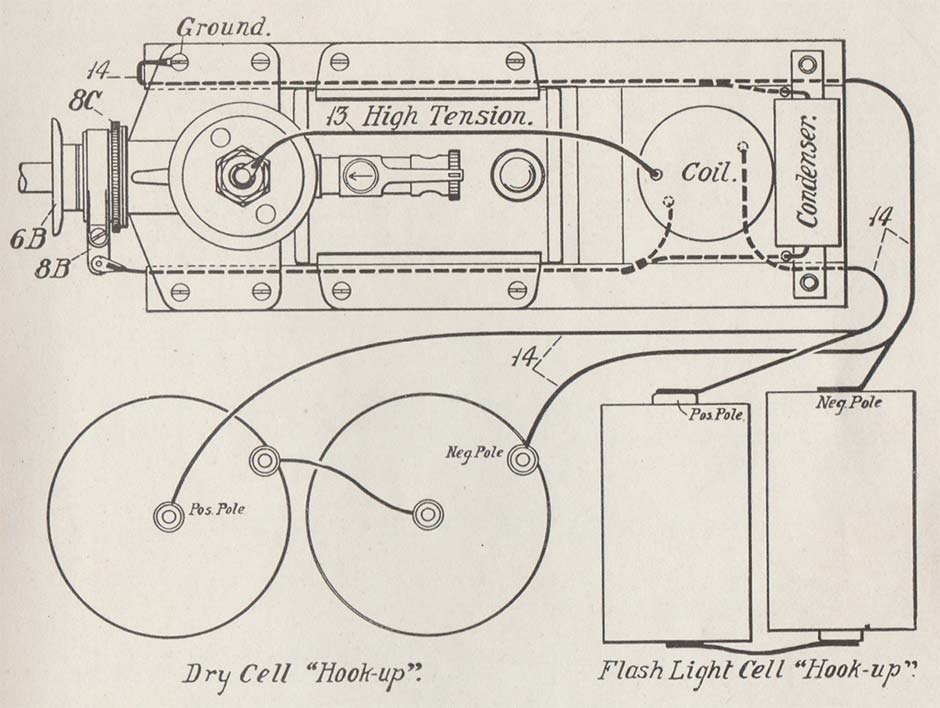 The Brown Junior Motor is not a toy, but a highly perfected and delicately made piece of mechanism, and as such must be handled with care when running to avoid the possibility of bodily harm, or injury to the motor itself.

To operate it successfully, it is Imperative that you familiarize yourself with its operating principle, component parts and their functions.

The Motor is a four (4) port, two stroke (“Two-cycle”) Internal Combustion Engine, which means that it requires two (2) full movements of the piston (one down, one up)—to complete the operating cycle.

WHERE DOES THE FORCE COME FROM?

The impelling force is derived from the ignition (by an electric spark) of the mixture of gasoline vapor and air.

The lower proportions, 1:6, 1:7 and 1:8 are called Rich Mixtures, and made considerable smoke in burning, which is apt to leave heavy carbon deposits, while the higher proportions 1:13, 1:14 and 1:15 are called Lean Mixtures. These burn with much less smoke, do not deposit excess carbon, and much greater efficiency is obtained with the Lean Mixtures than the Rich. They are to be striven for in operating any Internal Combustion Engine.

On the BROWN JUNIOR MOTOR the Single-Spark Battery Ignition system is used. In it, the circuit is normally open except for an instant before the impulse is to be sent to the Spark Plug. The process of Firing is the momentary closure of the circuit* and a quick opening immediately thereafter. This sudden break of the system induces a “kick” of high potential in the secondary of the Coil, and the discharge is directed to the Spark Plug by breaking the circuit through separating the two Contact Rivets or Points (parts 8A, Fig. 1 and Fig. 3) of the Timer.
*It is necessary that the circuit remain closed long enough to permit a thorough saturation of the magnetic system before it is again opened, which is the reason for the long “flat” on the Cam Washer, part 6B-Fig. 2, page 3.

WORD OF WARNING ABOUT THE COIL

The coil is built for use with LOW VOLTAGES, not over 3 to 3,5 volts. TWO Standard flash light cells or two Dry Cells hooked up in the manner shown in Fig. 5 should give you the proper voltage required to operate the motor. If the motor is left standing for any length of time with the circuit closed—the Coil will overheat and cause trouble.

The arrow on the squared section of the shaft, in Fig. 2, indicates the normal direction of rotation, which is “counter clockwise,” and the Cam is shown in the correct position for the motor to run in that direction.

ADVANCING AND RETARDING THE SPARK

Study carefully figures 2 and 4 and note the position of the Breaker Spring Arm (part 8). In each case the Arm is shown (full line) in a vertical position, which causes the spark to occur when the piston is at the very top of its stroke.

To ADVANCE the spark move the arm AGAINST the direction of rotation.

To RETARD the spark move the arm WITH the direction of rotation.

The position of the Arm (dotted lines) illustrates the above very clearly.

For STARTING, while the motor is new, or during the breaking-in period, after becoming familiar with its care and operation, start your motor with the arm in the upright position. If you desire to advance the spark to attain a greater speed, stop the motor and place timer arm in desired position, then start.

Advancing of the spark causes the motor to speed up, but of course there is a limit to such advance, as too much will slow down the motor or cause it to stop.

TO OPERATE THE MOTOR

The motor must be mounted securely on skids either of your own design or as furnished (Models B & C). Should you wish to bench test the motor before installing in your plane or boat, clamp the skids between the jaws or a vice or fasten it securely to a bench or table top with “C” or carpenter clamps, and by the rear end of the skids, so that the propellor or fly wheel will swing clear of the edge of the bench or table. Next clamp the prop securely between the two washers, parts 6b and 6c, with the center line of the prop horizontal when the piston is at the bottom of its stroke. By observing the movement of the Piston through the Exhaust Port Holes, you can make this adjustment nicely.

Set the Breaker Spring, or Timer Arm, in the vertical position as shown in Fig. 2. Fill the Fuel Tank with a mixture of 4 parts gasoline to 1 part oil as described on Page 1. Next make sure all connections are well soldered as shown in Fig. 5. The motor is now ready for starting.

Models B & M: Close the Needle Valve Nut and back it off to the number of turns shown on the tag. Close the Choke Nut, or close the Intake holes with your fingers, and turn the prop of fly wheel until you get a slight puff or cough from the motor. The prop or fly wheel is adjusted to rotate in a counter-clockwise direction. Open the Choke Nut wide and flip the prop or fly wheel smartly. You should find the motor immediately start to turn over. Adjust the Needle Valve to the desired speed.

Model C & D: The Needle Valve is closed when pointing away from the Cylinder and directly in line with the Air Intake Tube. When open it is at right angles to the Air Intake Tube, pointing away from it. With the Needle Valve between the “open” and “close” position, close the air hole with your finger and turn the prop until you get a slight puff or cough from the motor. Remove your finger from the air hole and flip the prop smartly You should find that the motor immediately starts to turn over. Manipulate the needle valve toward “closed” position until the motor is humming smartly.

TO INVERT THE MOTOR

We do not mount our motors in the inverted position as we do not feel there is enough gained by doing so. Also if you are not familiar with the operation of the motor, you are apt to flood the crankcase which in turn will foul the spark plug. Should you wish to invert the motor though, same may be done by removing the fuel tank and needle valve assembly from the air intake tube and inserting same again in the opposite direction, making sure that the small hole in the needle valve body is facing the cylinder.