Stu Richmond, at age 14, launches a Scientific Models Victory airplane at the camera in 1942

Stuart L. “Stu” Richmond, who devoted most of his life to teaching others about aeromodeling through hundreds of columns and articles, went to the flying field one last time with his son and grandson at the beginning of April 2014. He passed away April 12 at his home in Apache Junction, Arizona, at the age of 85.

Articles, columns, and plans by the AMA Model Aviation Hall inductee were published in aeromodeling magazines. The publications include Model Builder, RC Modeler, RC Report, and Radio Control Models. According to Stu’s AMA History Program autobiography, he was friends with Model Airplane News editor Charlie Grant, who often called Stu and encouraged him to teach others through his writing. “He would say, ‘Stu, you got ’em as your audience, now TEACH ’em!’”

“He never missed a deadline,” Brian Richmond said about his father. “He was constantly published without any interruptions for over 30 years,” he added.

His last magazine column, “Just Plane Fun,” was published in January 2006 in RC Report. Brian remembers when his father decided that 33 years of writing was enough. “He called me up one day and asked me how I felt about him retiring as a columnist,” Brian said. “He told me he was tired. I told him it’s time to quit then … he did.”

In addition to educating countless strangers about how fun modeling could be through his writing, Stu taught his three sons how to fly. Brian and his brother, Bruce, continued their father’s RC Pylon Racing legacy and were on Team USA when it won first place in the 1987 F3D FAI World RC Pylon Championships. Son Perry fell in love with model trains.

Stu began building model aircraft when he was a child, and as a teenager he carved three Scale identification models for airscrew training for the U.S. Navy to use during World War II. He continued to build and design and his PT-40 RC design won the 1989 Powered Model Airplane Kit of the Year award at the Nuremburg Toy/Hobby Fair in Germany. The aircraft was kitted by Great Planes Model Manufacturing Company and is still being built by modelers. 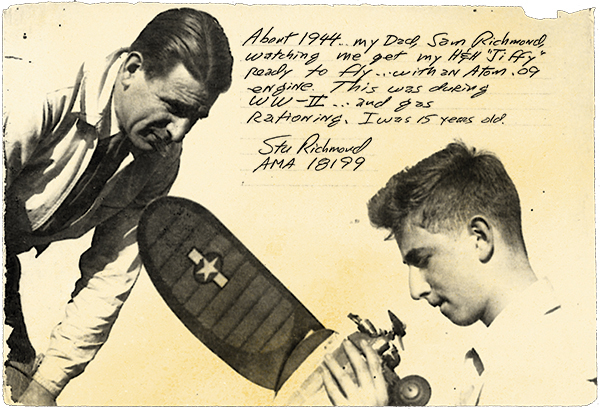 Stu attended the Georgia Institute of Technology, where he earned a degree in industrial management in 1951. Stu served as an armament systems officer in the U.S. Air Force from 1952 to 1954, and later created a color photo film developing business. He sold the business to a Fortune 500 company—retiring at the age of 43.

He competed in RC Pylon Racing and served as a CD for and was the secretary of the RC Association of Central Florida, served as chair of the Remote Control Association of Central Florida’s Constitution Committee, and cofounded the Fulton Flying Circus Club in Roswell, Georgia. He also took first place in the 1996 Society of Antique Modelers’ Championship in Pensacola, Florida, and became a member of the International Model Aircraft Association in 1997.

(Left) A Florida Flyer airplane that Stu designed. He finished third in the Nats with this aircraft in the early 1970s. The transmitter is one of the first six built by Futaba. The company gave it to Stu to test. (Center) This Corkscrew was one of Stu’s designs, published in 1972. (Right) Stu (L), his son Brian (R), and his grandson, Alex, at a Pylon Race in Phoenix in 2006.

In addition to being inducted into the AMA Model Aviation Hall of Fame in 2001, Stu received the AMA Pioneers Award in 1998, and the prestigious Howard McEntee Award in 2006. In his autobiography, he wrote about receiving the Howard McEntee Memorial Award, which is presented each year by the Westchester Radio Aero Modelers (WRAM). “In February 2006, I was honored with Radio Control model’s highest, most-coveted award. I received the 2006 Howard McEntee Medal at the annual WRAM Trade Show at the Westchester County Center in White Plains, New York.”

Stu Richmond with his Red Zephyr in approximately 2011 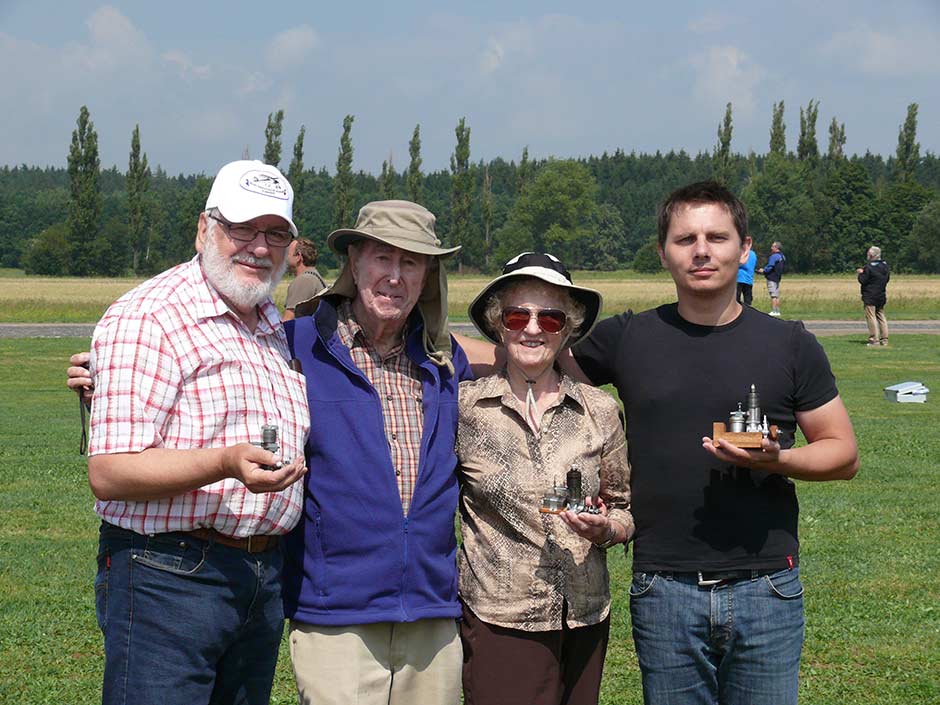 I was delighted to met Stu personally at the vintage aeromodelers meeting in the Czech Republic during his overseas vacation in summer 2013. We became close friends and stayed in contact during the next couple of months. I still remember and never forget that fine sunny day sated by the engines and aeromodels flavoured by unforgettable vintage smell enriched with Stu’s stories he lived thru and experienced all over the world.