Here, boys, is a CLASS “C” contest model that refuses to stay on the ground. During its ramblings through the ozone, it has had its share of roof-top and tree-top landings, yet it’s still in one piece! What’s more, all repair work that’s been necessary has been minor.

The trophy this job won (see photos) was awarded for the highest average time in the cabin event at the first Metropolitan Model Airplane Council contest held in 1939 at Holmes Airport, New York City. The first two official flights the “Paragon” made were of two minutes duration each. 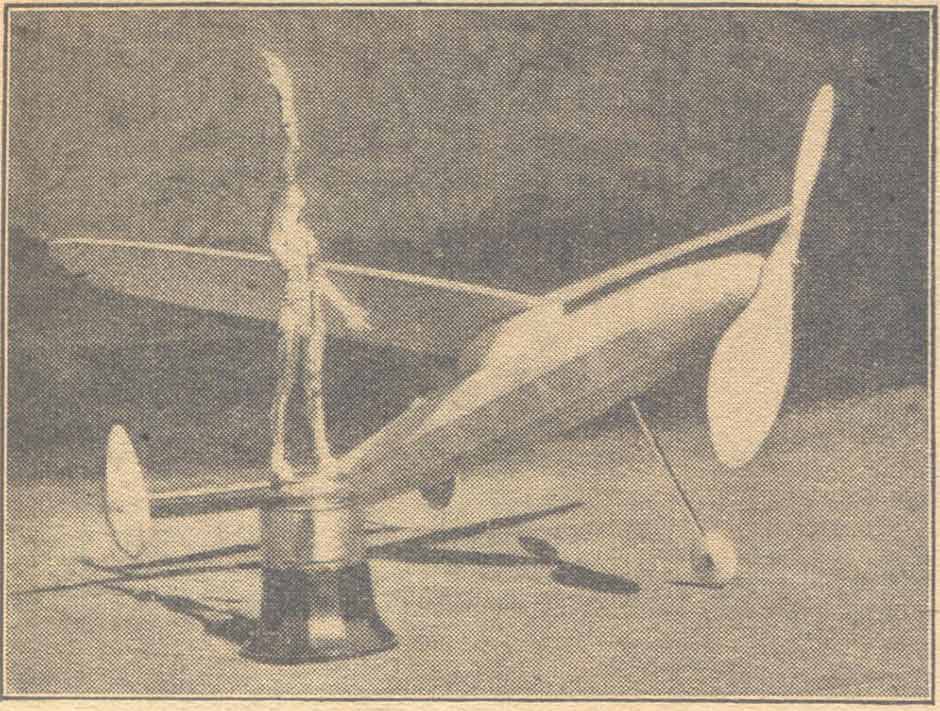 Above we have a shot of the “Paragon” standing proudly next to the trophy she copped at the New York MMAC contest.

But on the third try, the model was taken in hand by a kind thermal, raising the three-flight average to three minutes, plus. In tests conducted during cool evenings after the contest, the average flight time was two minutes. This model is intended for the model builder who has already achieved success with other designs. And if you have successfully built and flown a cabin model like Earl Stahl’s famous “Hi-Climber,” then you can easily construct the “Paragon”. Note, incidentally, that all ribs and wing outlines are given full size, relieving you of the time and energy required in scaling-up parts.

Use hard balsa for the longerons. Medium balsa may be used for the cross-braces as these parts are not subjected to the strains that the longerons carry from the rubber tension.

After the fuselage sides have been assembled, they should be lifted from the plan and pried apart with a razor blade. Now, the cross-braces are cemented between these two sides, resulting in a framework as shown in step one on the fuselage plate. In step two, balsa blocks, approximately 1/2″ thick, are glued to each side of fuselage as shown. Use 1/2″ thick soft stock on the tail portion. Remember that these blocks are for fairing and need not be strong.

While the framework is drying, cut from 1/8″ stock four soft stringers and shape as shown above the fuselage side drawing. These four stringers are cemented in place next, care being exercised in centering each one. All joints in the fuselage should be cemented a second time for extra strength, and the landing gear should be glued in place before the fuselage is covered. Make sure that the landing gear strut is anchored solidly in the fuselage, and, if necessary, bind the strut with thread wherever it contacts balsa.

The nose and tail blocks should be sanded to a circular cross-section. The fuselage is covered with plain tissue and clear doped three times. Carve the 15/8″ wheel from hard balsa, 1/4″ thick, and mount a large-faced bushing through the center to keep the axle from wearing the wheel center away. The cross section of the wheel should be an approximate streamline, and the wheel should revolve freely on the axle.

In this pic, our model’s lines are brought out even more graphically. Sure, that stab’s big-but it’s also a sure-fire thermal-catcher that makes for long flights.

The pylon on which the wing rests is tilted so that the wing has 1/s” incidence in relation to the fuselage centerline. Note the “U” shaped hooks on the front and rear of the pylon. These hooks allow the wing to dis-engage immediately if the plane strikes anything while in flight. Do not forget to cement the tail incidence blocks in place now.

The tail plug is carved from medium balsa and should be a snug fit. The 1/16″ steel wire tail hook is well anchored in the tail plug, as it has to stand a lot of punishment when the motor is stretched and wound. A piece of cambric or rubber tubing slipped over the hook will protect the rubber motor from being ripped under full winds.

The nose plug is carved from medium balsa, and when the prop shaft is being formed, it should be so drilled that the prop points down and to the right. This is necessary to overcome stalling under full power and to provide a slight right circle. The nose plug should have a bushing or large washer cemented to its front and rear face to keep the rapidly revolving shaft from chewing up the wood and changing the amount of right and down thrust.

Carve the prop from a block the size indicated in the drawing and work in a slight amount of undercamber in each blade. The cross-section, “B-B,” gives the approximate airfoil that should be carved into each blade.

The free-wheeling feature is absolutely necessary in a design of this type, but the particular one to use is left to the choice of the builder, since there are so many types to pick from. The type shown, however, is very simple and practically foolproof. This ingenious jigger is the brainwork of Louis Garami, who needs no introduction to old FLYING ACES readers. Oh yes, don’t forget to use a ball bearing washer, as the motor exerts a lot of pressure between the prop and plug. The ballbearing washer will decrease the friction, also, making it easier for the propeller to free-wheel.

For best results, the prop should have a smooth finish. Gloss is obtained by six coats of dope with intermediate sanding, permitting the propeller to slide through the air with the greatest of ease.

A motor consisting of 24 strands of 1/8″ flat rubber should be used, and it should be well lubricated with a good brand of lubricant, so that plenty of turns can be packed into it to provide ample power for long, flat glide flights.

The wing and stabilizer outlines should be drawn to double the size shown on the plans, bringing them up to full size. The ribs are shown full size, as are the curved wing trailing edges, The spars and leading edges should be tapered before assembly, as per instructions on the drawings. Note that no dimensions are given for the size of the wing leading edges; they are made from 1/s” thick stock tapered to the height indicated on the leading edge of each rib. 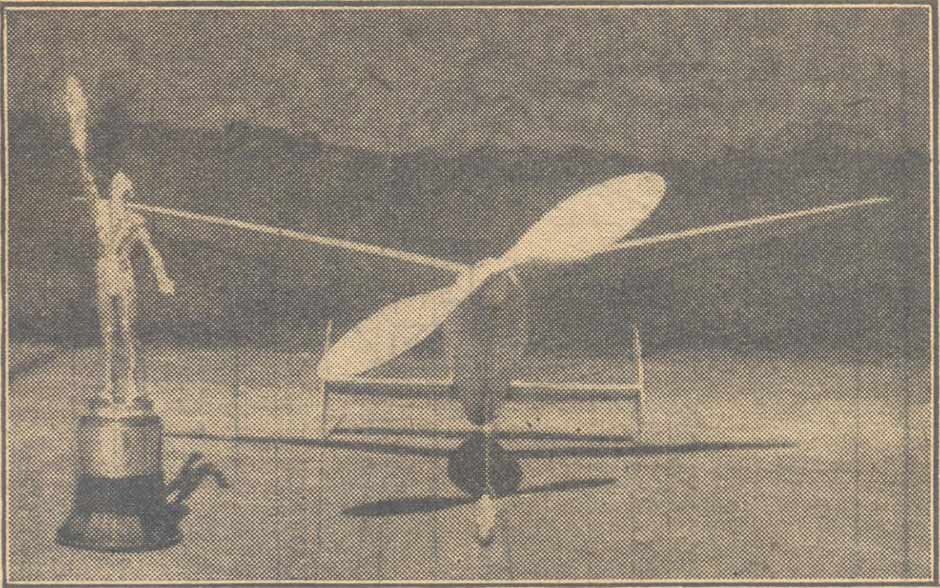 The piece indicated by the number 12 is the dihedral joiner, and should be cemented to the rear of the spar of each wing half. When this has been done, each tip should have 31/2″ dihedral when the wing is in a level position. The 1/32″ sheet balsa used for the leading edge covering should not be cemented in place until the entire wing has been completed, with dihedral.

In covering the wing and stabilizer, brightly colored tissue should be used in order to offer the best visibility possible when the model is outlined at a high altitude against the sky. Red is an excellent color for this as it can be distinguished more easily against the sky or a green and brown background on the ground after the model has landed.

After the model is completed, it should be glided to see if it is balanced properly. Any diving tendencies should be counteracted by us-ing small incidence blocks cemented to the leading edge of the wing where it rests on the pylon. Conversely, stalling tendencies should be nullified by using incidence blocks under the trailing edge. Due to the slight offset in the rudders, the model should glide in right-hand circles, and should climb in circles smaller than those in the glide.

After the model has been flown under 100 hand winds, the wing and stabilizer should both be left alone, further adjusting being made through offsetting the propeller. As more and more turns are given on successive flights, the craft may tend to bank to the right, starting a spiral dive. Do not do any more flying until the wing has been warped for a left bank. (When viewed from the rear, the right wing should have more incidence than the left.)

Now, under full winds, the “Paragon” should bank to the left when climbing in right hand circles. In any case, do not give the ship full winds immediately after warping the wing or tail surfaces.

Adjustments should always be followed by flights of few turns, gradually increased until full turns are “packed in” with a winder. The reason for this is that you don’t know for sure how the model will behave under new adjustments-so it is best to work from scratch. 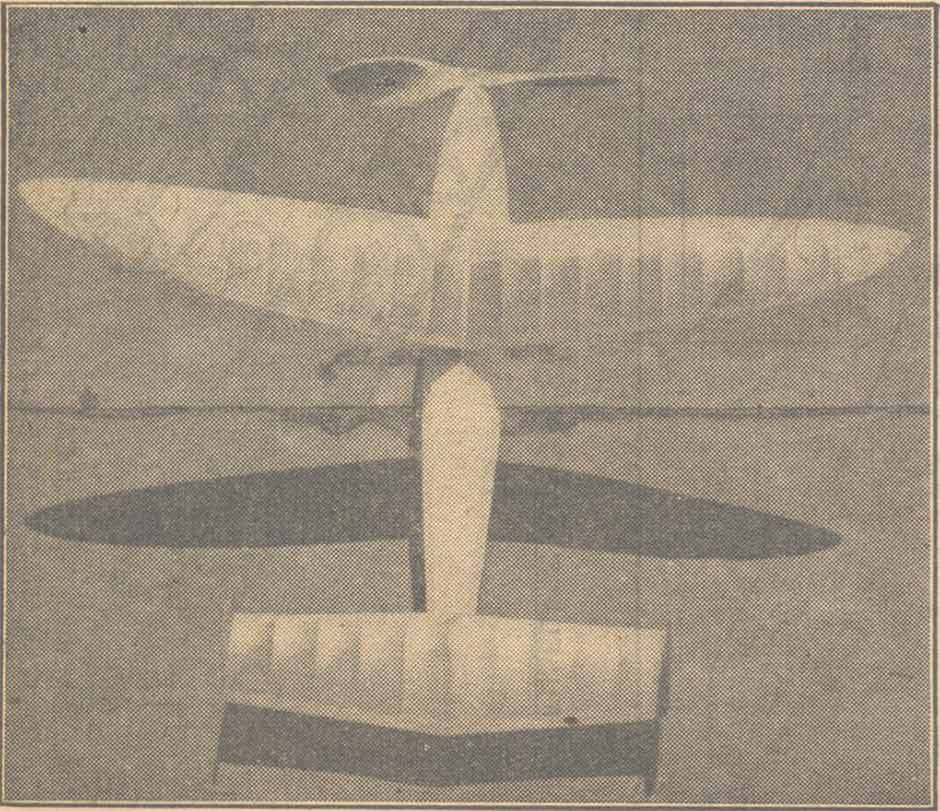 In some cases, the model may tend to stall under power, hanging on its propeller at a high angle and not gaining altitude as it should. This is best remedied by giving the airscrew a little right thrust, tightening up the circle under power, and eliminating the stall.

Under correct adjustments, the “Paragon” should perform as follows : The climb should be fast, in a tight right-hand circle, with the model leaning to the left. As the motor unwinds, the climb should decrease until the model starts to cruise with a few turns left in the motor. The craft slows down when the propeller starts to free-wheel, and it should then glide without banking to either side.

The reason for the level attitude is: if the model banks to either side slightly in the glide, it is really in a side-slip that lasts during all the gliding time. As you know, a side-slip is used to lose altitude when a large ship comes in for a landing, so get a long distance away from your model while it is flying and see if it is leaning to either side.

Well, if your “Paragon” gets into, an argument with a thermal, you had better hop onto your bike or into your car, and give chase. You know, she won’t stay in sight very long if you stand there mouth agape!