John Brodbeck (L) and Al Prather (of Prather Products), circa 1983

John first started flying free-flight models in 1936 using a Brown Junior engine. He also turned to Baby Cyclone and Hurleman engines for some of his early planes. He was not happy with the performance of most of the early engines and, like many early flyers, did some fine-tuning and modification of his own. He like the magnesium-cased Torpedo and Bullet engines of the time but found that the sleeve was too loose to allow it to produce its full potential power. Fuel would go around the sleeve and out the exhaust. He made his own sleeves and connecting rods and turned the engine into a better performer on his models. Working on these engines gave him thoughts of making his own engine, but World War II put a temporary hold on his plans.

During the war he worked at California Machining in Los Angeles and eventually worked his way up to General Manager. He had met Lud Kading in 1932 during a three-car trade and eventually the two started flying models together in about 1936. John was in need of a good man to run the tool room at California Machining and contacted Lud who was working in the wood shop at Fluor Corp. Lud left Fluor and came to work at California Machining for the duration of the war. In April of 1944 it became apparent that the wartime production was winding down, and they were about to lose their jobs. John still had dreams of building engines of his own, but raw materials were still in short supply. John and Lud decided to start their own business taking on whatever machining jobs they could find until they could get the material and capital they needed to start building engines. In July 1944 they started K&B manufacturing with a couple of old Logan lathes and some drill presses in Lud’s two car garage because John only had a one car garage. They obtained work making cannon yokes for Lockheed and eventually found their way into making precision machined parts for the Manhattan Project—the making of the first atomic bomb. 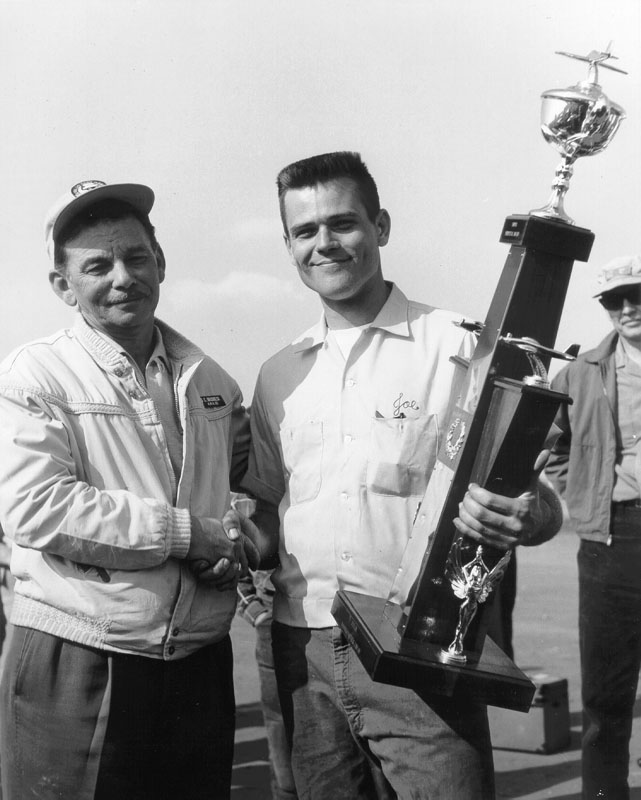 John Brodbeck (L) with a young Joe Martin holding one of the trophies John generously donated for an early RC flying contest Joe and Jerry Nelson organized in Turlock, CA.

Finally they had enough working capital to start making the engines they had dreamed of. They designed the .29 engine based on his improvements to the old Torpedo engine and had a run of engines produced using all screw machine parts…no castings. They learned from friend Nathan Smith, a manufacturer of coils that another friend Bill Atwood owned the rights to the old Torpedo and Bullet engines. Bill had purchased the inventory from the screw machine shop that had been producing them. He no longer was interested in making the engines so John was able to purchase the name and about $200 in old inventory from Bill. The Torpedo name had pre-war recognition, so in June, 1946 they built their first engine which hit the hobby shops in 1947 as the Torpedo*

*Apparently Mr. Atwood also sold the rights to the Torpedo name to another company who introduced an engine called the “Torpedo Special”, which caused some confusion in the marketplace. Though the AMA video shows and ad for the “1947 Torpedo Special” while describing the K&B Torpedo engine, I am told by experts at The Engine Collectors’ Journal that it is not a K&B engine shown in the ad. 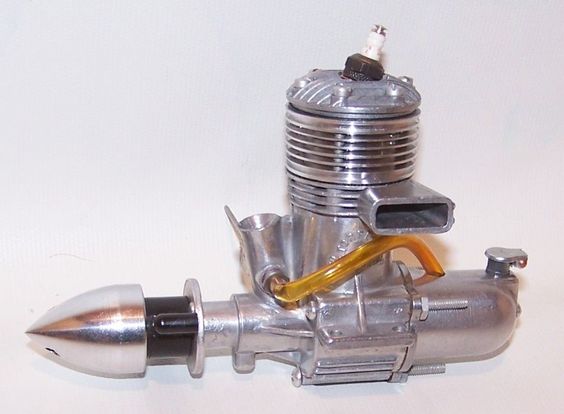 They then began work on a tiny .010 cubic inch engine, but after about six months of trying, they couldn’t get it to run. They doubled the displacement to .020, but still had trouble because the smallest existing glow plug was still very large compared to their cylinder size. One night John came up with the idea for his “capsule plug”, which was a one-piece combustion chamber and plug, and they got it to work. No kits or propellers were then available for an engine that small, and they feared they would “let the cat out of the bag” if they went to a prop manufacturer and asked for a 4-3/4″ prop. They came up with a die for a bent aluminum prop the right size for their own engine and made their own props so they could catch the market by surprise. 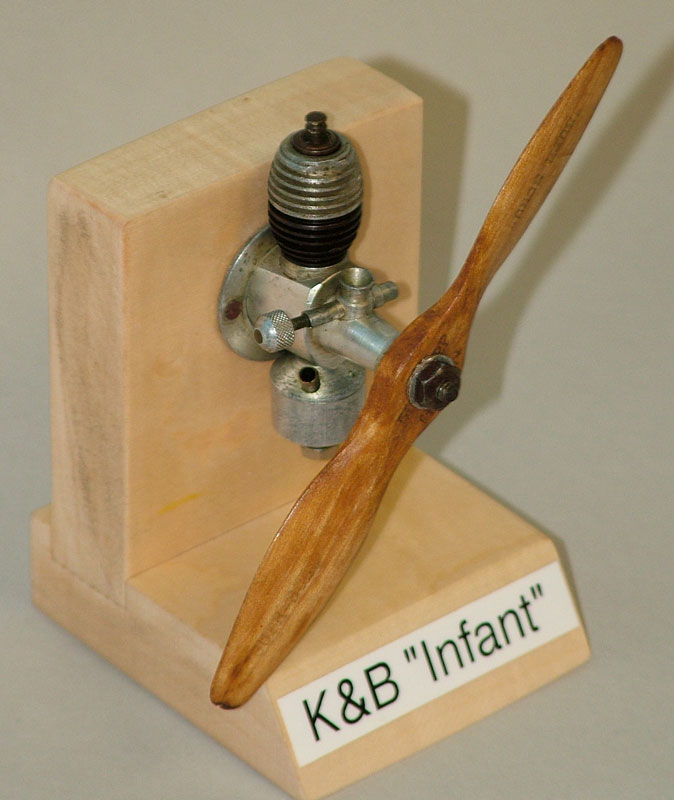 Working capital was still tight, but they decided to make a run of 10,000 “Infant Torpedo” engines. They announced the product after the first 3500 were assembled and John says that one week later they had orders for “280,000 engines.” They spent the next year feverishly trying to meet the demand for this engine and never did catch up. They also introduced a .035 and .049 engine that eventually became more popular than the tiny .020. No one seems to be able to agree on an exact figure of how many of the engines were actually sold, but for a long time it was “every one they could make”, which is every manufacturer’s dream. Like Irv Ohlsson and some of the other pioneer engine builders, they were fortunate to be in the hobby at a time of tremendous growth and had the necessary skills and talents to take advantage of it.

Lud Kading left the company in 1953 to pursue other interests. John and Lud have remained lifelong friends, and John never felt the need to remove the “K” from the K&B name. After 1953 the company was run by John alone until eventually turning the reigns over to his son. 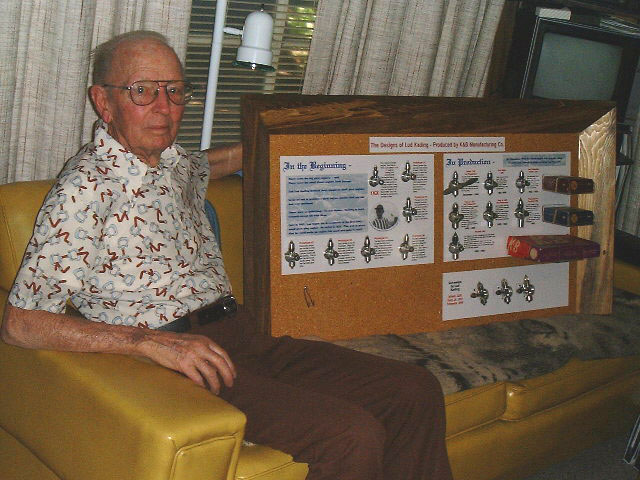 A photo of Lud Kading from 2001 (age 87) shows him with a display of some of the “Infant” K&B engines he and John Brodbeck produced. The display was built by Tim Dannels of The Engine Collector’s Journal, who also contributed the photo.

During this time they grew through several manufacturing facilities in Los Angeles, Compton and eventually in 1961 they moved to Downey. K&B remained a success story in the model engine field because their engines always took advantage of the latest technology and quality control methods. In the mid-1980’s they began using CNC tools to improve quality and consistency even further. John’s son John Brodbeck “Junior” eventually took over running the company, and it was later sold to Randy and Anching Linsalato whose RJL Enterprises continues to market the K&B engine line today. This makes K&B the longest continuous manufacturer of model engines in the USA. Production of the engines has now returned from Arizona to Monrovia in Southern California where K&B Model Products Inc. continues to be one of the premier American model engine manufacturers. 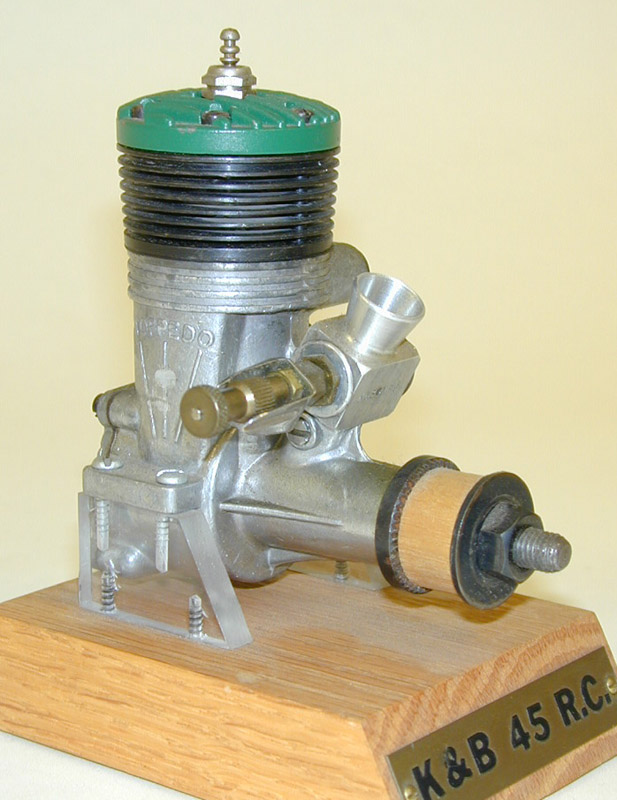 John was voted into the NAMBA (North American Model Boating Association) International Hall of Fame in 1982 and has also been a member of the AMA (Academy of Model Aeronautics) Hall of Fame since 1977.