When I first tried to pronounce the name “Tlush” I had to practice and I still stumble over it now and then. It just doesn’t come easily. Tlush is one of the most historic “unknown” names of the early 1930’s powered model beginnings and strangely enough the Tlush Super Ace Motor Co, 755 Sixth St, Lyndhurst, N.J. sold most of their production overseas. In the May 1936 issue of MAN the small ad pictured appeared. The Fall, 1967 Engine Collector’s Journal has the definitive history of the engine. Then in the MECA Bulletin, Jan/Feb 1972, Hank Hilscher had an announcement that two of the Tlush brothers, Frank and Charlie had brought parts for 24 original Super Aces out of “hiding” and master craftsmen at the brothers American Standard Corporation, Trevose, Pa. would assemble them and possibly a few hundred more with new and old parts. When the ad in MAN, July 1972 came out, offering the 24 at $125 each they were scooped up quickly. The ad showed Frank at his workbench assembling the old gems. But let’s backtrack and get some great information on these engines gleaned from the ECJ article. 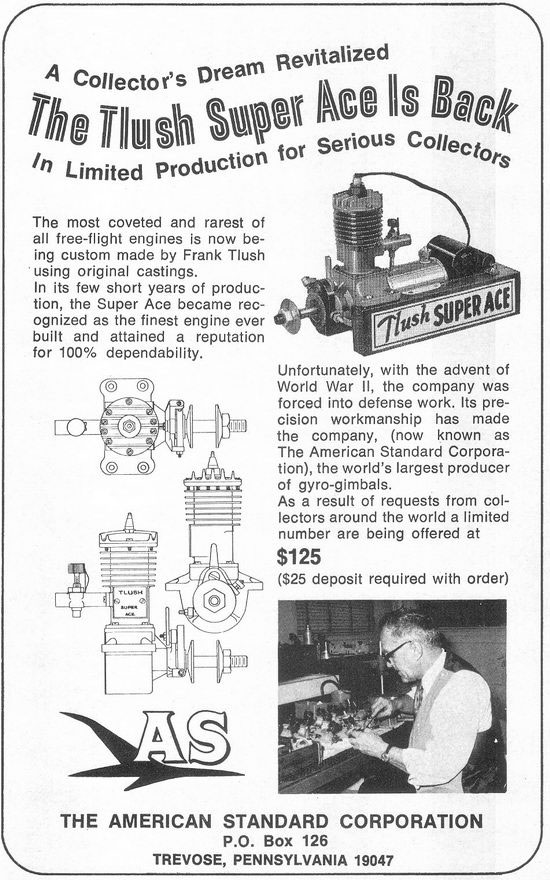 Unknown in this period (early 1930s) were the efforts of the Tlush family of five brothers (Charles, John, Vincent, Francis and Al) with Charlie and Frank being the most model minded”, begins the narrative. Living in New York City, they were aware of the Browns, and Louis Loutrel whose engine they chose as the model for their engine…the early engines had a close resemblance. Aluminum barstock and cast iron cylinders with ringed pistons the brothers replaced later with magnesium crankcases that they pioneered. The brothers felt their second prototype could outpower the Browns and Loutrels in 1933 but oddly enough switched to the design of a much smaller midget gas engine informally named the Tlush Mite in honor of the plane in which it was lost. Only two engines were completed, both with magnesium cases and then it was back seriously to the larger 61 cid Super Ace. They experimented with spark plugs, coils, propellers and the unique “V” tank. An ad was placed and orders from allover the world began to come in. The first engines went to South Africa and Australia who found that the new Super Ace outpowered the Browns that had arrived before them.

Both India and the Belgian Congo ordered all they could. US welcoming for the new engine was limited as relatively few were available. With the domestic market almost “cornered” by the Browns, and Baby Cyclones, modelers were content to stay with them. Frank Tlush’s Super Ace powered “TEXACO” trophy winner at the 1936 Nats resulted in some dealer establishments and a few hundred sales at “home”. It is estimated that some 500 or so were sold in the USA while over 5,000 went overseas in this pre WWII period. As late as 1941 the Tlush factory was sending out engines overseas as they were firmly established on the foreign market with the Super Ace being to many in the remote areas of the world as the Brown was in the USA. Interestingly, the Tlush Co.’s pioneering use of magnesium enabled them to devise new methods and procedures for handling the metal which directly resulted in their world famous American Standards Corporation in Pennsylvania. At this time, the Museum of the Academy of Model Aeronautics has a magnificent historical display of Tlush paraphernalia and engines donated by the Tlush brothers. And of course these almost unobtainable Super Aces are very desired by collectors who manage to “shuck out” big bucks when one is available.

Charlie has passed on and Frank is left to ponder the great contribution they made when Charlie put the old original parts away and then “shocked” the modeling world when assembled and made available once again. It was a rare time, back in 1972 for collectors and all of us.