Almost eighty years ago, MAN readers opened their copies of the December 1939 issue to be greeted by a massive three page advertising spread announcing a splendid new engine, the .65 cu. in. “Super Cyclone.” Produced and marketed by the rather grandly titled Aircraft Industries Corporation, of Glendale California, the Super-Cyclone joined (and eventually superseded) the popular .36 cu. in. “Baby Cyclone.” The design of the Baby-Cyclone had been largely the work of one Bill Atwood, who later went on to produce many famous engines in his own name and later had a hand in the development of several other American engines. Bill left Aircraft Industries in 1938 and the Super-Cyclone was designed by Mel Anderson, another pioneer who had built his first model internal combustion engine in 1931. After WW II Mel set up his own company to manufacture the Anderson Spitfire, which bore more than a passing resemblance to the Super-Cyclone.

As introduced. in 1939, the Super Cyclone had the designation “G” series following the A to F model Baby Cyclones marketed between 1936 and 1940 and had a nominal displacement of .0647 cu in. In the summer of 1940, however, the “GR” series was announced to comply with the 10cc limit for tethered race cars then becoming so popular. It was the GR series now renamed Super Cyclone Inc., reintroduced after the war, that this articles focuses on. 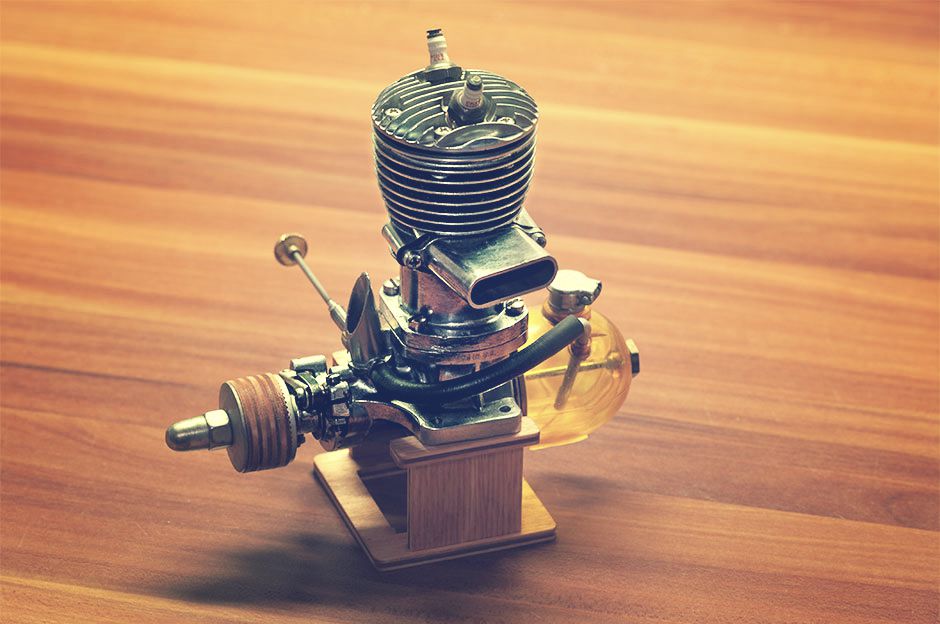 During the late 1940s, many changes took place in the model engine world. The advent of the glow plug made possible the Half-A explosion and the traditional large spark-ignition engines faded, the Super Cyke in 1952. The beginnings of the new “Old Timer” meets in the mid 1950s and model engine collecting caused a conflict of “keeping or flying” that the demand for classics outstripped supply and two different attempts to bring out the Super Cyke again were made, in 1965 and again in 1971. Others brought out “popular” replicas (refer to last months Profile No. 67 on Herb Wahl). As one of the most highly regarded engines of the late pre and post war period, the Super Cyclone was a real natural for reproduction revival and it is with this late revival of the Series GR that this report deals. In between two short time and much less quality “revivals” took place, one in 1965 and once in 1971…each occasion based on such original parts and tooling as remained available and intact.

Not surprisingly, however, Mr. Tom Morrison, a man of uncommonly good skills and foresight re-tooled the Super Cyclone from scratch in the early 1980s and brought forth one of the most beautiful reproduction ever, rivaling Herb Wahl’s superior craftsmanship but with only a single model engine. Tom Morrison’s connection with model engines went back to his boyhood in the 30s and the Super Cyke was the motor he most admired. Accordingly the rights to use of the engine were acquired and “Super Cyclone Engines” of Phoenix, AZ was born. The engine, all of the paperwork, a reprint of the original parts listing, a set of “original” decals and all came in a replica of the four-color display box…at $189.50. Just a bit more than the original $15.00 postage paid from the factory. 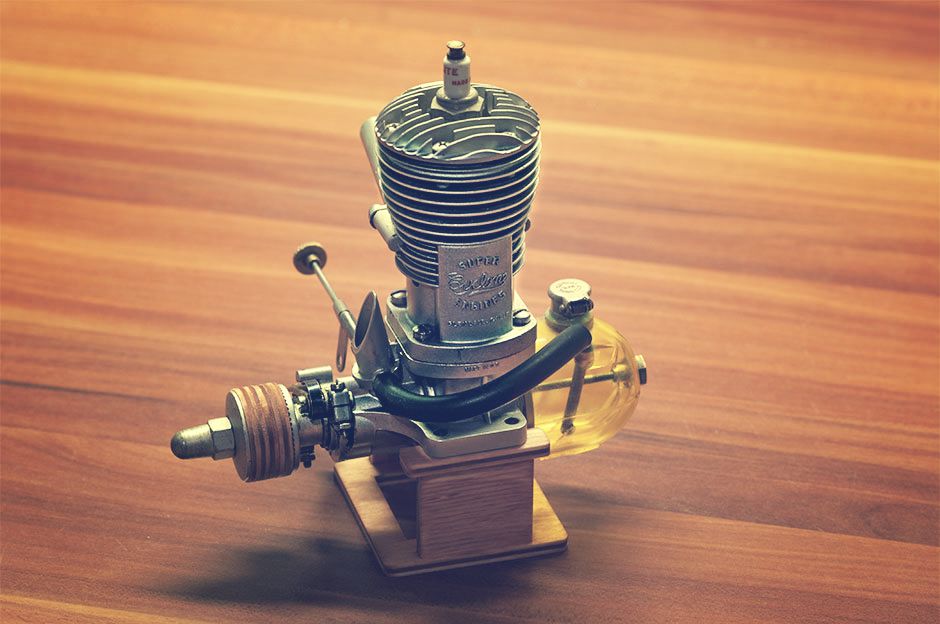 The new 1984 model had faithfully duplicated parts, with the instantly recognizable difference of the matte finish body castings. The new investment castings were uncommonly close to the original die castings, including the embossed lettering on the side of the cylinder, which were better than the originals.

The Cyke had a short crankcase with a separate flange-fitting cylinder assembly, a screw-in rear cover plate and a bronze bushed main bearing. The one piece counterbalanced crankshaft, provided a ball thrust bearing, was bored for the gas passage. This supplemented by a period of sub-piston induction below the piston skirt, goes through the cylinder via two pairs of ports, through the cylinder, one at front and one at back. The cylinder liner is shrunk into the cylinder casting which is attached to the crankcase with four fillister head screws. The relief-ground, lapped cast-iron piston had a full floating tubular wrist pin equipped with aluminum end pads. The con rod was of aircraft aluminum. The inside cylinder head was flat, without a slot for piston baffle clearance, for gasoline based fuels. The 3/8″ Japanese NGK CM-6 spark plug was recut to fit the 3/8-24 thread of the Champions. A gasket and six Phillips screws secure the head to the upper case. The open point spark timer assembly is an exact copy of the original. The amber colored, transparent gas tank was also a duplicate of the original complete with Gits cap.

When the Cyke was first marketed, most .60 size engine were rated at one fifth to one quarter horsepower, but Tom Morrison had rpm figures up to around 7,500 on a 14/6 prop which supports his assessment of the engines being more powerful. Tom moved his operation north to Show Low, AZ for more wide open spaces and sadly his declining health from cancer took his life in the early 1990s. During these last years Walt Huhn of Covina, CA (Apollo Mtrs) had begun to advertise Cyclone parts and service while he had been assisting Tom Morrison to complete his engines. Tom’s widow sold the business to Walt after Tom’s passing and Walt became “Mr. Super Cyclone” among the old timers, specializing engine tuning and new assembly sales. Walt’s engines do not show the pristine work of the Morrison reproductions and he has made a few changes i.e. tanks etc.

Little collecting interest is shown in the Cykes, except for the very early originals.