When Bernard B. Winston set up the beginnings of the huge America’s Hobby Center in lower Manhattan, in the middle 1930’s, he was an admirer of Louis Loutrel and the Loutrel engine being offered to modelers. When Loutrel failed to interest the modelers in his engine, Winston purchased the manufacturing rights, tooling and “goodwill” and dubbed it the “G.H.Q.”, which became his “house” model engine. To this day we do not know what the initials stand for but suspect “Gas Head Quarters.”

The excellent quality of materials of which the engine was made were never an issue, but rather the slovenly fit and finish that earned the disdain and “image” of the hard-to-start engine as a loser. Among the very cheaply priced engines, literally thousands were sold and those few that “ran right” did so by careful refitting, gasketing, and hours of attention. Jokes of all types abounded and deservedly so. Winston published a four page pamphlet (reduced cover pictured below) that was a marvel of commentary on the engine, its running instructions, wiring diagram, important pointers, parts replacement and engine accessories. These included a cast metal prop, flywheel, spark plug wrench, special “lubro” oil, battery box, coil holders, gauge set, midget switch, running stand and an exhaust stack that was held on by the top of the side intake. 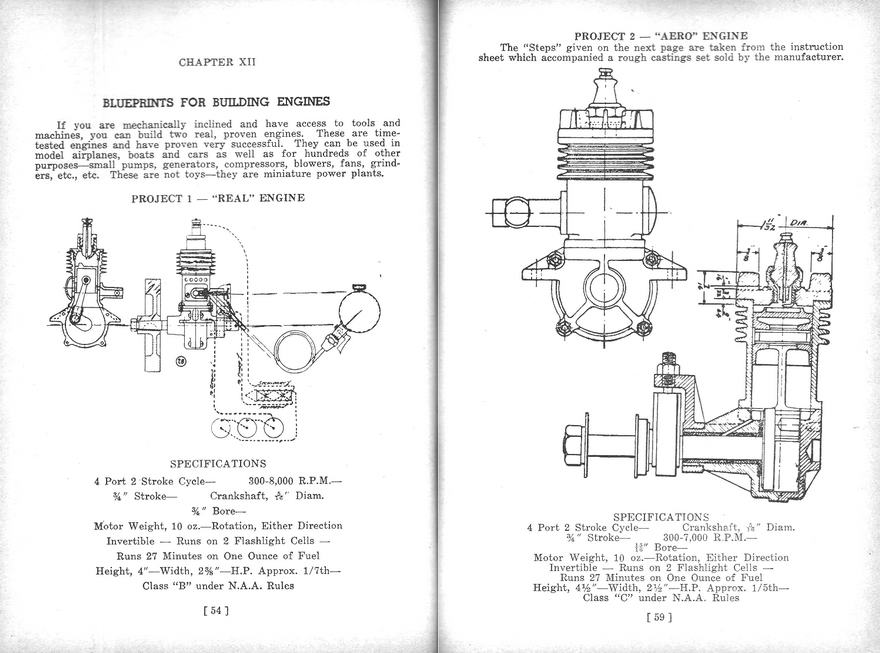 In addition Winston delved into publishing with his model engine handbooks and guides for use of the engine in planes, cars and boats. The engine itself, was of .517 cid and while awkward and ugly looking, encompassed all of the then desired features such as “automotive timer”, cast iron cylinder and piston, spoke head, two piece, cast aluminum case, spring held needle, and soldered brass intake tube. It was a side intake model with exhaust directly above and with strengthening webs on the removable back case half. Four screws held the cast iron cylinder to the two part lower base, which in turn was held together by four case bolts. It had beam mounts and the bypass cover secured by two screws, had cast on it, “GHQ NY USA Aero”. Eight screws held the aluminum spoke head on with a Champion V plug centered. The shaft bearing was bronze as was the wrist pin, the piston was aluminum with oil rings and the 5/16″ shaft “centerless ground”. The 14″ cast aluminum prop was roughly finished. All very impressive to read about and for $9.95 and later $3.95 as a kit. 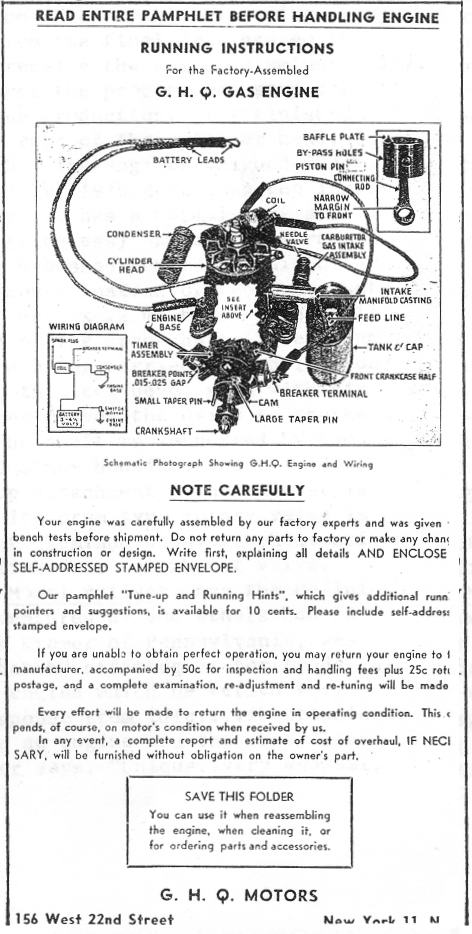 In spite of the negative commentary above, the “charm” of this engine is that it is a much coveted collecting engine. Most in new condition go for over $100 from those avid fellows who “just want one’ to display. The oval gas tank and propellor are very hard to locate and parts to finish an incomplete one are non existent. As Winston said in his 1940 Model Gas Engine Handbook, “your GHQ is a simple mechanical device. When all operating factors are present, it will run”. But to get them all “present” is a real chore. This engine was a legend in its own time and is even more so today.